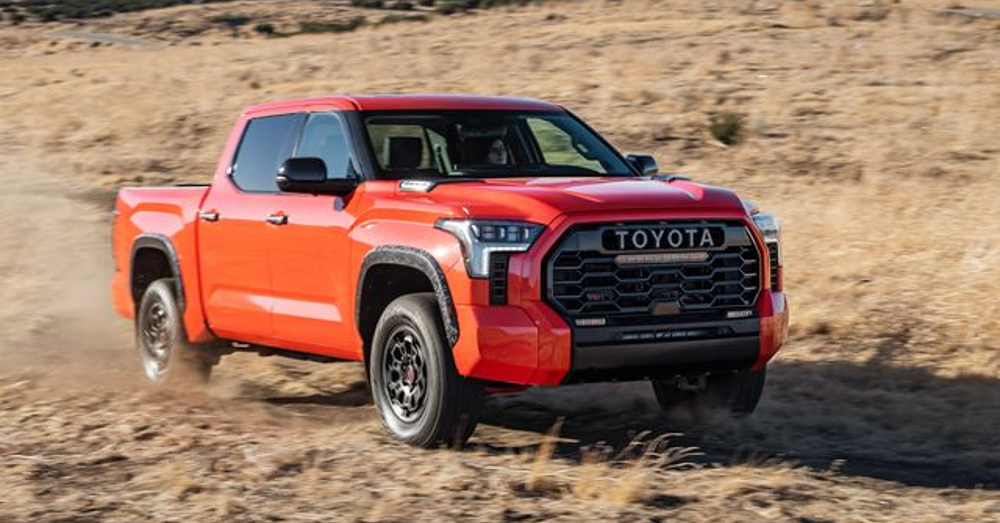 The team at The Fast Lane Truck put the new 2022 Toyota Tundra up against some stalwart full-size truck challengers, and the results are interesting.

Why would the Tundra take on other trucks? The 2022 version isn’t the same truck it was last year. This new model year delivers a brand-new generation for the Tundra, offering the right mix of power and performance with a distinct hybrid powertrain under the hood. This new setup brings more power than before from a lighter build, and the team at TFL Trucks wants to know how well this new Toyota performs, and so do we.

What Are They Packing?

Most of the full-size trucks in the market have more than one powertrain offered. Toyota finally does with the new hybrid powertrain that gives this truck a bit more juice than the regular model. It might seem odd to bring trucks with very different power levels to a contest like this, but that’s what we’ve got. Let’s see what each one is and what powertrain is used for this race.

The GMC Sierra 1500 AT4X brings us a big and strong naturally aspirated 6.2-liter V8 engine mated to a ten-speed automatic transmission. This setup allows the Sierra to have 420 horsepower and 460 lb-ft of torque. Could the biggest engine in the contest become the winner?

Adding a Duramax diesel engine to the contest, the Chevrolet Silverado 1500 Trail Boss offers an interesting mix of power. The powertrain is a 3.0-liter turbocharged V6 diesel engine mated to a ten-speed automatic transmission. This powertrain is rated at 277 horsepower and 460 lb-ft of torque to give it the same torque as the V8 in the GMC Sierra.

The Ford F-150 King Ranch is powered by a strong hybrid V6 powertrain that brings 430 horsepower and 570 lb-ft of torque to the mix. Could this powertrain be enough to challenge the Toyota Tundra during this speed race?

The 2022 Toyota Tundra uses a 3.5-liter hybrid V6 powertrain giving this truck 437 horsepower and 583 lb-ft of torque. This truck is the most powerful in this contest, but will that give the Toyota the win over the other three competitors? Let’s find out.

Diesel and V8 Power Are No Match

There are many reasons why trucks are being equipped with hybrid engines, and off-the-line speed is one of them. The Tundra easily whips the GMC Sierra and Chevrolet Silverado during this contest. The naturally-aspirated V8 engine loses power when at altitude, and this race was held a mile above sea level. The diesel power of the Duramax engine in the Chevrolet isn’t made for speed, it’s made for towing power. Unfortunately, Chevrolet brought the wrong took to this contest, and it lost to the hybrid-powered Toyota very quickly.

The Hybrids Take the Mark

Even though the Toyota Tundra brings more power to the contest, the Ford F-150 beat it during this race. In fact, a second race was held with a Toyota using a different setup, one was 2WD, the other 4WD, and the results were the same. It doesn’t seem to make sense, but the Ford hybrid powertrain can return a quarter-mile time in the 14-second range while the Toyota finishes this run about a second behind the Ford.

What Else Does the New Tundra Offer?

This new truck gives us increased capabilities and dynamics during any drive. The front features a large hexagonal grille, and the body is chiseled and muscular to give you a truck that looks as tough as it is. You won’t find a V8 anywhere near the Toyota engine bay, only a pair of V6 engines, one with hybrid power and the other a turbocharged model without the added hybrid benefits. This truck now has a trim to give you a luxury ride. This trim is called Capstone, and it meets all the desires of a discerning truck owner.

A Build to Make You Smile

The Toyota Tundra brings a new chassis and suspension, which ride on a more rigid, fully boxed ladder frame. The biggest change for the driving components of this truck is the switch from leaf springs to a multi-link live-axle suspension with outboard-mounted coil springs. This setup sounds complicated but suffice it to say, it offers a much more comfortable ride. You’ll likely spend a lot of time diving with an empty bed, which is when you’ll truly notice the difference compared to the old layout.

The Electronics Got a Lot Bigger

Without looking at the seats or comfort levels of this truck, which are both impressive qualities, you’ll see pair of massive screens in the dashboard. Even though luxury SUVs are offering much larger screens, we haven’t seen a 12.3-inch digital instrument cluster and 14-inch infotainment screen in the same truck yet This certainly puts the Tundra ahead in the screen size race which seems to be something Ram started a couple of years ago. This truck also delivers the right connectivity with wireless Apple CarPlay and Android Auto.

Is This the Right Truck for You?

The contest held by TFL Trucks shows the Tundra putting up a big fight and coming in just behind the Ford F-150. Does that make it the right truck for you to drive? If you’re looking for towing power, you’ll need to take a second look at what each brand offers compared to Toyota. When you want luxury levels of driving, the Tundra tosses its hat in the ring, but is it the model you want to drive? This could be the right truck for you, but a speed race isn’t usually a determining factor in buying a truck, but it’s a lot of fun to watch and talk about.

Incidentally, the GMC Sierra and Chevrolet Silverado from the contest raced each other to determine a clear third and fourth-place finish. Watch the video and see the results for yourself.