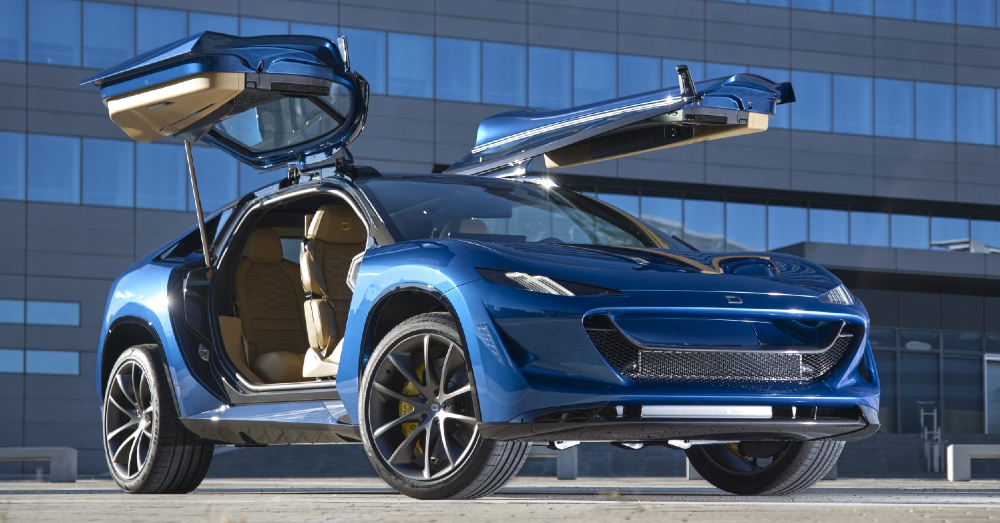 A fire-breathing electric SUV is born! This incredibly powerful and fast SUV is the Drako Dragon, which shows the world what an EV should be.

The Dragon was first teased over the summer, but now it’s a reality. This incredible SUV brings the heat with 2000 horsepower coming out of four electric motors. If ever there was a super-SUV with pure electric power, this is the one. Of course, as you can see, the price is pretty steep, which means you’ve got to shell out the big bucks to drive this amazingly powerful electric SUV.

How Fast is this New Drako Electric SUV?

The horsepower number sounds insane enough, but the actual speed of this electric SUV is just as amazing. The Dragon has four electric motors, one at each wheel, that pump out 2000 horsepower combined. All this power translates to a sprint time of 1.9 seconds to reach 60 mph, which is extremely fast. In fact, it could probably be even faster if tire technology could keep up with the power output. The top speed of this Drako SUV is a limited 200 mph, and this amazing vehicle can finish the quarter-mile in 9.0 seconds.

Somewhere along the way, an Extreme E racer got together with the new Lotus Eletre, and the two had a baby together. At least, that’s what the new Drako Dragon looks like. This amazing SUV has a sloping roofline we admire with coupe-like SUVs, and it delivers a gorgeous trapezoidal grille that includes cooling vents and a front wing to add more range and downforce to this SUV.

Up front, we see slim LED headlights while similarly-shaped lights find their way to the rear of this SUV. The roof features some ultra-bright rally lights, which are great for your time on the trails. Of course, it’s not likely this high-priced SUV makes its way to the trails very often.

Drako Put Some Sustainability into this SUV

Drako Motors, an EV startup out of San Jose, California, added some sustainability to this new SUV. This is something we’ve come to expect from companies in states like California, where the environment is part of everyday discussions. The body panels of this SUV are constructed with some sustainable natural fiber composites. This allows a 70 percent reduction in the use of plastics for this SUV. The body panels wrap around a carbon-fiber chassis, which is both light and strong, helping this SUV make full use of the 2000 horsepower coming out of the electric motors.

Those Massive Doors Tho

We’re used to the gullwing doors found on the Tesla Model X, which allows easier access to the rear of the SUV. That said, the doors of the Drako Dragon take this feature to the extreme. The Dragon is a two-row SUV, and it only has two doors, which are massive. These large doors offer easier ingress to the rear seats and remove the need for B-pillars for this SUV. These doors have a purpose, but they’re also extremely large, giving us something to talk about.

Expected Luxury Found in the Cabin

What should you find in an SUV that costs nearly $300,000? You should find serious upscale luxury and quality to give you the features and style you want to see. The cabin of the Dragon shows us a massive 17.1-inch touchscreen, a digital instrument cluster, a flat-bottom steering wheel, and extremely comfortable seats. This is a simple styling theme that is part of what most automakers are doing with their new vehicles.

The Dragon uses cameras instead of mirrors, giving you the different views you need on small screens rather than on the mirrors themselves. This could take some getting used to, but it’s worth the learning curve to drive this SUV. Rear passengers can enjoy screens mounted in the leather and carbon-fiber front seats. Above all occupants, you’ll see a panoramic glass roof, providing the outward look of the world around this SUV.

Does This SUV Have The Right Control Elements?

The incredible power of the Drako Dragon requires large brakes and an amazing suspension system to ensure you can control the drive of this high-powered luxury electric SUV. The front brakes use 10-piston calipers, while the rear brakes have six-piston models to use carbon-ceramic brake rotors to slow this SUV down when you need to.

You’ll also find an impressive adaptive suspension that works great and offers various ride heights. At its lowest, this SUV sits 6.4 inches off the ground, but it can lift up to 12.4 inches above the ground when put in Overland mode. This could be right for your fun on the trails if you dare take this expensive machine away from the paved roads.

How Fast Can this Electric SUV Recharge?

The Drako Dragon brings a ton of fun to the drive. Actually, it’s a little more than two tons of fun at a curb weight of 4,969 pounds. The batteries for this SUV were designed in-house and offer tons of power, but they also give owners 420 miles of driving range. This is an excellent distance, making it much easier for buyers to enjoy this SUV. The maximum charging rate is listed at 500 kW, and the batteries can charge from 10 to 80 percent in only ten minutes.

When Will this New Electric SUV Be Available?

With so much information known about the Dragon, you might expect it to be ready to build and ship, but that’s not the case. This new EV will be built in the United States, but it won’t begin to reach customers until 2026. Drako plans to make 5,000 models of the Dragon each year, which should be enough to keep those willing to spend $290,000 for their high-powered SUV happy.

If this is an SUV you want to purchase, Drake is already taking reservations for it. Once in line, you know the wait is at least three years long, but that’s typical of some high-powered and high-priced vehicles from boutique automakers.