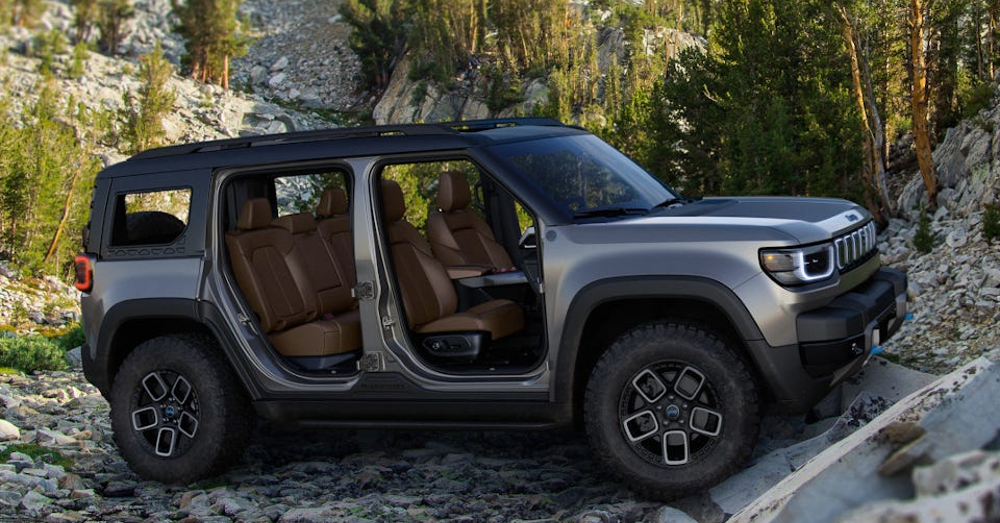 Two names will come to the Jeep lineup in 2024 to add electrification. These two Jeep EVs are just the beginning of the changes for this brand.

Recently, Jeep announced the addition of four new electric models to the lineup. One didn’t come with a name, and one isn’t scheduled for the US just yet, but the other two are on the way. In 2024, we will see the addition of the new Jeep Recon and Wagoneer S models to give us a couple of new names in the market.

The Transition Began with Hybrids

When the Jeep name is mentioned, we often immediately think of the Wrangler and how tough, rugged, and old-school this SUV can be. That said, Jeep has been working toward a more efficient lineup for a few years and is now ready to venture into the world of electric vehicles. We’ve already gotten the benefits of the Wrangler 4xe and Grand Cherokee 4xe, which both use an impressive plug-in hybrid powertrain to deliver the power and drive we desire. Not long from now, these two hybrids will be joined by the new EVs that should offer plenty of off-road performance.

What is the Jeep Recon?

If all you knew was the name of the Jeep Recon, what would you think it is? If you answered that it’s an electrified version of the Wrangler, you’re correct. The new Recon offers off-roaders an alternative to the venerable Wrangler. This makes perfect sense. It’s nearly implausible to think that Jeep would ever discontinue the Wrangler. We might see an electrified version in the future, but starting in 2024, if you want one of the off-road Jeep EVs, the right name for you is the Jeep Recon.

The Recon comes with the Jeep Selec-Terrain traction management system, an e-locker axle, underbody skid plates, tow hooks, and large off-road tires. The Recon follows along the Wrangler personality with removable doors and a power top to offer the open-air driving that we associate with driving a Jeep Wrangler.

The largest of the new electric Jeep SUVs is the Wagoneer S. This is the only one that brings us a name we’re familiar with already. The Wagoneer S is a midsize electric that offers style that’s similar to the full-size Wagoneer without the massive size. As expected, you’ll find the Jeep off-road prowess in this SUV, but that drive is combined with the electric vehicle architecture of this SUV.

How will the new Jeep Wagoneer S entice new Jeep owners? Anyone looking for an electric SUV that brings a full menu to the drive should consider this model. The Wagoneer S is one of the most impressive Jeep EVs, and it’s expected to bring 600 horsepower, incredible acceleration, and a 400-mile driving range. These performance qualities, along with the luxury features, should be more than enough to make sure Jeep shoppers consider this new electric model when they’re ready for the next Jeep they want to drive.

The First Jeep EV Won’t Arrive in the United States

Before the Recon or Wagoneer S heads to the United States, another electric Jeep will hit the market and hit it in Europe. This new model, called the Avenger, appears to be built to be the same size as the current Jeep Compass. Jeep says this new electric model is smaller than you might think. In fact, it’s smaller than the current Renegade, which is the Jeep subcompact SUV. At this size, the Avenger might not be useful in the United States.

What do the Hybrid Jeeps Offer?

The Jeep Grand Cherokee 4xe offers the same powertrain and power level but increases the electric driving range to 25 miles. Recharging the batteries of either of these hybrid SUVs takes a couple of hours using a 240-volt setup, but the gasoline engines can keep you driving for a long time between charges.

Could the Wagoneer S Set a new Standard for EV Driving?

While knowing the Jeep Wagoneer S will offer 600 horsepower is impressive, that’s not the most impressive part of the Jeep EVs that we’ve heard. This new midsize SUV should offer 400 miles of driving, which would set a new mark for the brand and for the electric vehicle world. Has Stellantis found the secret formula to offering more driving range, or will this quoted distance be on the European scale, which is always more generous than what the EPA in the United States offers?

What About that Fourth Model, Is It Coming to the US?

The new Jeep Avenger is being made in Poland, which tells us there aren’t any plans to bring this SUV to the US right now. The fourth model, which doesn’t have a name, leaves a lot of questions. Rumors tell it this new model could be similar in size to the Jeep Cherokee, but that’s not confirmed. Will that make it big enough for the US market, or will this be another Jeep we don’t see?

Are Gas-Powered Models Being Phased Out?

This is more of a question for the entire market and not just Jeep. Learning that we’ll see a pair of Jeep EVs in the United States in a couple of years is pretty big news. That said, we see a movement away from gas-powered vehicles throughout the market. It might happen slowly, but there will come a time in the future when you won’t find any new gas or diesel-powered vehicles to buy. Will these Jeep SUVs be the cornerstones of the brand as the first EV models to arrive?